skip to main | skip to sidebar

Illinois is full of dedicated people and innovative ideas for addressing invasive species. From time to time, this blog is going to host guest articles in which the stories about some of these people, projects, or ideas are told. The next article in this series comes from Sarah Zack, with Illinois-Indiana Sea Grant and the Illinois Natural History Survey.  Sarah writes here about the Be a Hero-Transport Zero campaign.  All of the guest articles can be viewed HERE.

Be a hero – help prevent the spread of invaders in Illinois!
by Sarah Zack, Aquatic Invasive Species Specialist
Some of Illinois’ greatest natural treasures are Lake Michigan and the many inland lakes and rivers.  These waters are home for hundreds of fish, invertebrate, waterfowl and plant species, and they provide recreational opportunities and beautiful natural vistas for the people of Illinois to enjoy.  Illinois’ waters also provide a significant boost to our economy, since aquatic recreation is a favorite pastime of people all over the state.  Most people are probably already aware that invasive species – non-native plants, animals, or pathogens that cause harm to natural areas – have long been recognized as a serious economic and environmental threat.  Aquatic invasive species (AIS) can severely impede some of our favorite outdoor activities – Asian carp in the Illinois River can make waterskiing impossible, Eurasian watermilfoil infestations can choke waterways and make swimming difficult, round gobies can decimate smallmouth bass and crappie recruitment; the list goes on and on. In general, people are well aware of the potential negative impacts of AIS in their waterways, but what people don’t always know is that they can make a real difference in the fight against these aquatic invaders.
In collaboration with the Illinois Department of Natural Resources, Illinois-Indiana Sea Grant and the Illinois Natural History Survey (INHS) launched Be a Hero-Transport Zero™, a statewide outreach campaign designed to raise awareness of AIS prevention.

The target of this campaign is recreation­al water users – boaters, anglers, waterfowl hunters, and others who enjoy Illinois’ waters – who might unknow­ingly spread these species from one body of water to another. When people trailer their boats or move their gear after a day on the wa­ter, they may be carrying AIS that could acciden­tally be introduced into a new waterbody.  The campaign message emphasizes three simple actions to help pre­vent this from happening—remove plants, animals, and mud from all equipment, drain all water from your boat and gear, and dry everything thoroughly with a towel.

Figure 3: Television commercial promoting the Be A Hero-Transport Zero™ campaign.

Since its widespread release in May 2013, Be a Hero-Transport Zero™ has reached an impressive number of people in Illinois:
A recent survey conducted by INHS’s Human Dimensions Research Program indicated that the Be A Hero-Transport Zero™ campaign is effective.  Nearly 90% of those surveyed could correctly interpret the AIS prevention message represented by the logo.  Even more promising is the fact that people who had previously seen or heard the campaign message were significantly more likely to always remove and drain.  These data are very encouraging, and indicate that the public is getting the message that their actions are important in the fight against AIS.

This campaign is designed to address the spread of invasive species on land as well.  The Be a Hero-Transport Zero™ logo has also been adapted for terrestrial invasive plants (such as garlic mustard) and forest pests (such as the emerald ash borer).  Ultimately, Be A Hero-Transport Zero™ will convey a unify­ing message to anyone who boats, hikes, camps, fishes, or hunts in Illinois that invasive species aren’t good for Illinois’ economy or environment and that their actions can and do make a difference.  As the campaign pro­gresses, look for the Be A Hero-Transport Zero™ mes­sage at trailheads, on signage, and in hunting guides and pamphlets at natural areas throughout the state.

To round out our efforts, and truly make “Be a Hero” Illinois’ comprehensive invasive species campaign, we’re also gearing up to launch Be a Hero-Release Zero™.  This expansion of the campaign introduces water gardeners, aquarium hobbyists, and others who buy and sell species to safe alternatives to disposing of unwanted plants and animals.  Releasing plants and animals into nearby waterways might seem like a humane way to deal with the goldfish that’s outgrown his tank or the plants that have spread too thickly in your water garden, but this action could be unknowingly spreading invaders from one waterbody into another.  The Be a Hero-Release Zero™ message encourages gardeners and hobbyists to instead bag and place plants in the trash, find a new home for animals (or seek advice on humane disposal), and disinfect or properly dispose of water.
For more information about the Be a Hero-Transport Zero campaign, visit our website at transportzero.org.  Look for information about prevention tips for hikers, campers, and other recreationists, as well as information about the Release Zero campaign coming soon.
Sarah Zack is an aquatic invasive species specialist with Illinois-Indiana Sea Grant and the Illinois Natural History Survey. Please check out the Illinois-Indiana Sea Grant website  for information about aquatic invasive species in Illinois, or contact Sarah at szack@illinois.edu for more information
Posted by River to River CWMA at 11:13 AM 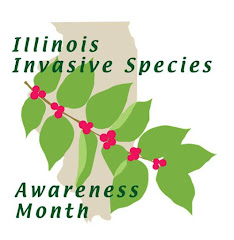 The goal of Illinois Invasive Species Awareness Month (ISAM) is to provide resources and opportunities to help stop the spread of invasive species in Illlinois - each and every person can make a difference, including you!